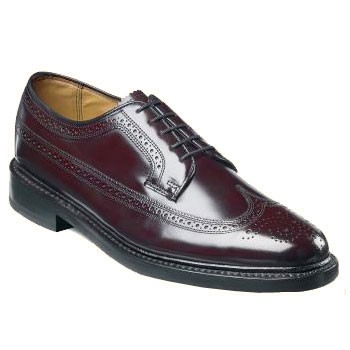 Timeless welt construction offers exceptional comfort and a finish to your business or dress look. Set in a wingtip design with smooth calfskin leather that has a bit of shine for evening occasions. Leather sole is low profile and is topped with a cushioned, leather covered footbed for comfort. Who says you cant be dressed to perfection all the time!

Nicest shoe I've ever bought 10/23/2018
By William Barnwell
I've bought lots of Floursheim shoes but none like these. These are built like a tank. I think I could put spikes on them and play any field sport. It is taking time to break them in but I've only worn them for about 3 hours at a time and a total of 3 times. They are probably just about a 1/2 size bigger than what I expected. I've been wearing a size 11 for a long time. I suggest a person measure their size at a store or as recommended by online stores to give yourself a chance. My left shoe slips just a bit. The right one did slip and now it's doing better. So this could be a function of the break-in also. I think this shoe will outlast me. I'm not quite 65. High skills and kudos to the craftsmen/women that make these shoes. I would buy again but now with more confidence. Dodd has done well in shipping. They are a little vague on delivery but well within the stated time of delivery.
Florsheim Kenmoor Imperial Wingtip Burgundy 17109-05 (Mens)

Florsheim Kenmoor 01/14/2015
By Jeff Lesser
A very nice shoe that plays above its cost. If you want long wingtips your choices are few from Florsheim to Alden with Allen Edmonds in the middle. Because of the lower price point and comments as to manufacture in India I gave these close scrutiny. Are they perfect, no but they don't cost $600 plus. If you like them order from Dodds and wear and enjoy them.
Florsheim Kenmoor Imperial Wingtip Burgundy 17109-05 (Mens)

Classic Design 03/27/2016
By Robert Spitzer
I have been wearing Florsheim Kenmoors for ages. As far as I can tell with the new pair nothing has changed, and these are the same great shoes. My only complaint is the laces are a bit too slick for my tastes.
In 1892, Milton Florsheim began producing shoes in a small factory located in Chicago, Illinois. The first pairs of Florsheim shoes made by Milton and his father, Sigmund, were a remarkable combination of style, comfort and high quality workmanship.

But shoes were not the only things Milton was building. He realized from the very beginning that a high quality product was only one of the factors necessary for success. A strong distribution network would be essential in making certain his exceptional footwear found its customers  entrepreneurs and self-starters in big cities and small towns across a fast growing nation.

As a new class of working men and professionals emerged, Florsheim shoes came to symbolize success. They also signaled a deep respect for yourself as well as for those with whom you did business. The tradition continues to this day. Though the specific shoes may change from season to season and year to year, all Florsheim shoes are designed for The Man Who Cares.
Special OffersSign up and stay informed on Sales, Special Offers, and receive Special Discounts