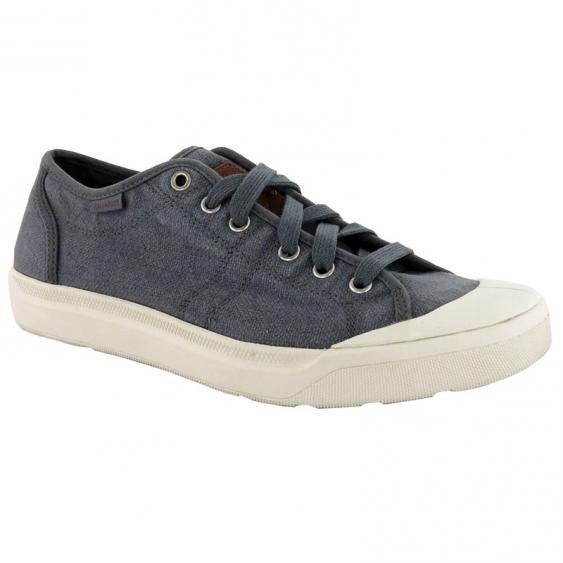 You may also like:
Retro cool style is yours with the Palladium Pallarue LC Sneaker. This men's sneaker features a washed textile upper and cotton canvas lining for breathability. The six eyelet lace system ensures a secure fit. Inside, the EVA cushioned footbed features a hugging heel cup to keep your foot in place and your heel supported. With logo details, a protective rubber toe cap, and the molded rubber outsole, you'll have the style to hit the streets in the Palladium Pallarue LC sneakers.


Write a review | No reviews for this product.
Palladium was founded in 1920 to make tires for the fledgling aviation industry. Tires were made by layering canvas bands underneath vulcanized rubber. Palladiums expertise was so advanced that soon the majority of Europes aircraft were using Palladium tires. After World War II, with aircraft manufacturing screeching to a halt, the demand for tires decreased dramatically. Palladium decided to open a plant in Pont De Cheruy, France, to start producing footwear that was as hard wearing as their tires. In 1947 the legendary Pampa boot was born, and the functionality, comfort and durability were so outstanding that the French Foreign Legion adopted it for their use. The Foreign Legion put the boot to the test in the harsh desert conditions of North Africa, and throughout the rugged terrain of the Atlas Mountains. Today, the original design, classic lines and time tested utility are as relevant as they have ever been. Combining over 60 years of authenticity with modern manufacturing, premium materials and cutting edge styling, Palladium boots are ready to help you explore your street, your city, or the world.
Special OffersSign up and stay informed on Sales, Special Offers, and receive Special Discounts